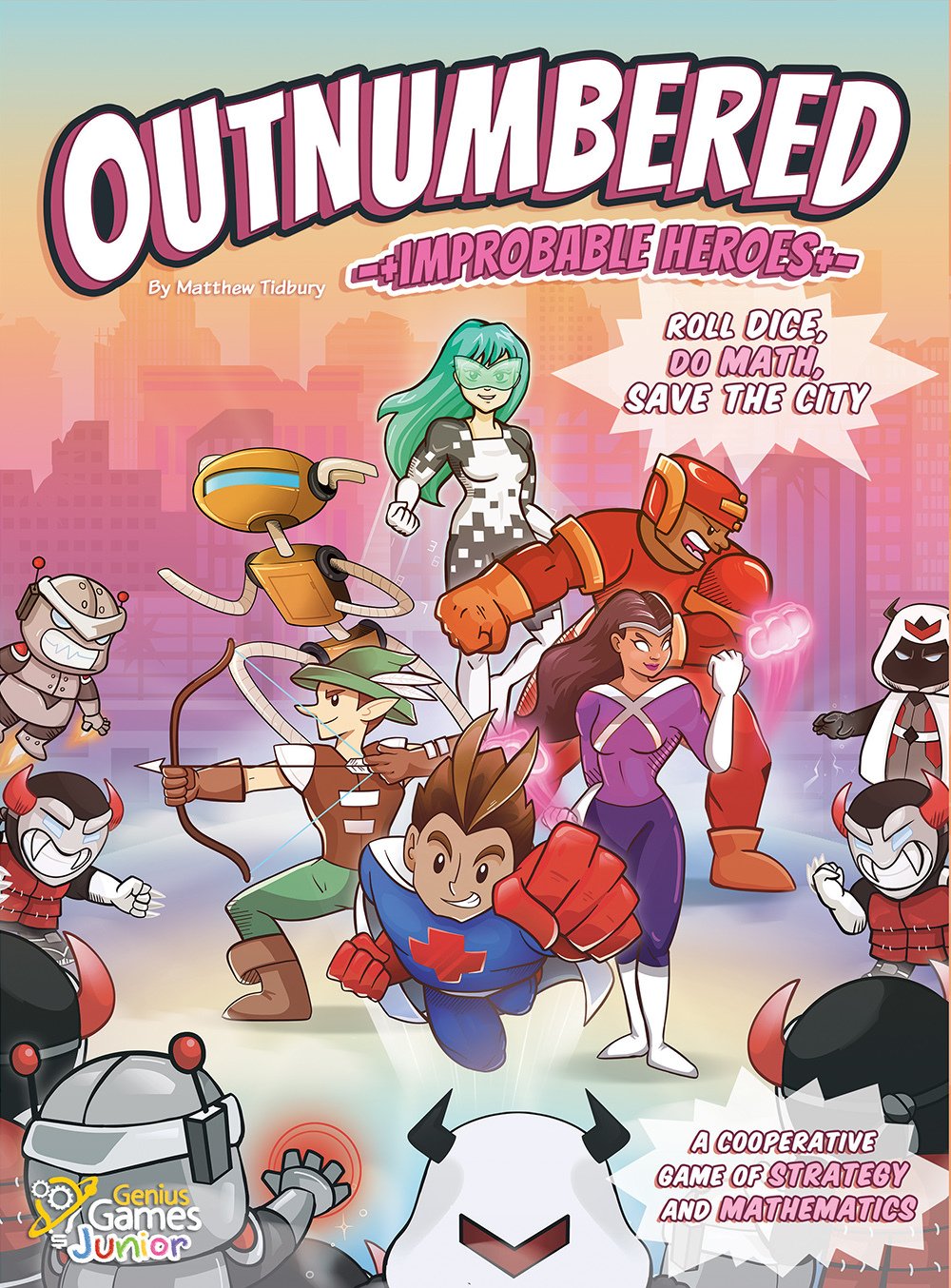 Based on our award-winning maths game City of Zombies, Outnumbered: Improbable Heroes has launched in America thanks to US-based publisher Genius Games

Combine forces to thwart evil in Outnumbered: Improbable Heroes, a math-based cooperative strategy game from the designer of City of Zombies.

Absolute Zero and his minions are loose in Megatropolis, trying to capture the powerful Infinity Generator!

Assemble your team and strategically plan out your sequence of attacks together.

As waves of Villains advance, you must use math skills and unique Hero Abilities to hit target numbers, repelling your nemesis and his minions.

Overcome their counterattacks and impose order over chaos!

Outnumbered is a cooperative math game for 1-6 players.

Waves of oncoming minions are advancing, each one showing a number on it. On each player’s turn, they will roll 3 dice, then use math operations and their “Hero Power” create the values shown on the minions, defeating them.

Players also have the opportunity to earn Bonus Cards by targeting specific minions, and must withstand Events that will increase the minion forces.

Minions will continue to appear and move down the board, defeating the players unless they are stopped in time.

This website uses cookies to improve your experience while you navigate through the website. Out of these, the cookies that are categorized as necessary are stored on your browser as they are essential for the working of basic functionalities of the website. We also use third-party cookies that help us analyze and understand how you use this website. These cookies will be stored in your browser only with your consent. You also have the option to opt-out of these cookies. But opting out of some of these cookies may affect your browsing experience.
Necessary Always Enabled
Necessary cookies are absolutely essential for the website to function properly. These cookies ensure basic functionalities and security features of the website, anonymously.
Functional
Functional cookies help to perform certain functionalities like sharing the content of the website on social media platforms, collect feedbacks, and other third-party features.
Performance
Performance cookies are used to understand and analyze the key performance indexes of the website which helps in delivering a better user experience for the visitors.
Analytics
Analytical cookies are used to understand how visitors interact with the website. These cookies help provide information on metrics the number of visitors, bounce rate, traffic source, etc.
Advertisement
Advertisement cookies are used to provide visitors with relevant ads and marketing campaigns. These cookies track visitors across websites and collect information to provide customized ads.
Others
Other uncategorized cookies are those that are being analyzed and have not been classified into a category as yet.
SAVE & ACCEPT