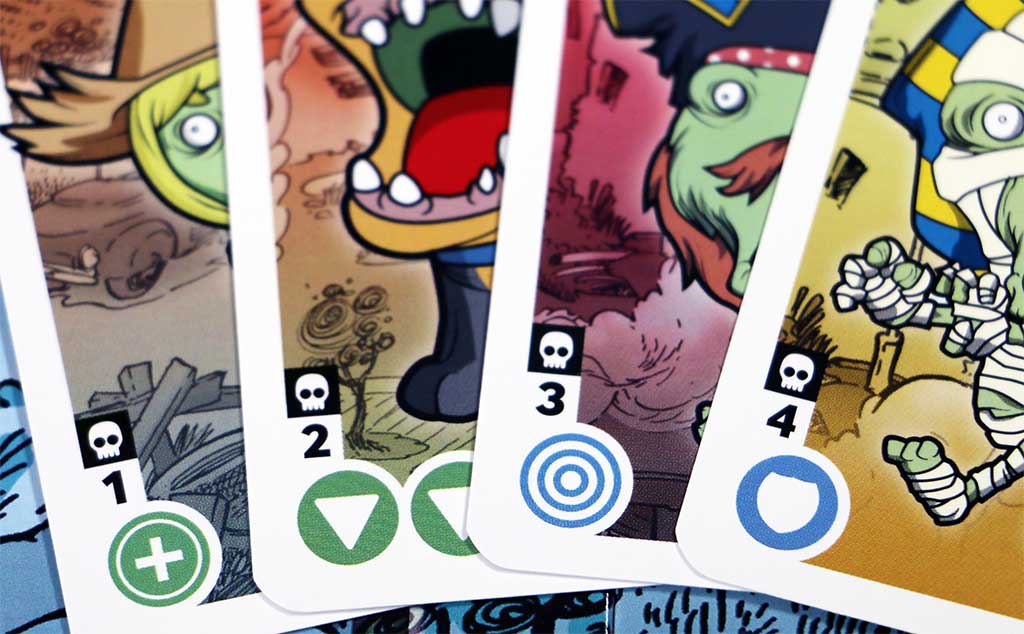 Play at one of the 4 difficulty levels or try Apocalypse mode for the ultimate challenge!

Out of the box, City of Zombies has 4 difficulty levels. These are shown by the numbers (1 to 4) on each Zombie card.

The icons that appear below these numbers are used in Apocalypse Mode, a mode that makes the Zombies super tough and gives them a number of special abilities!

Choosing a level to play at

For the Advanced level (Level 2) add the Zombie cards with a difficulty number of 2, so you’ll be playing with level 1 and 2 Zombies.

When playing you can have both the Green and Blue apocalypse icons active or chose only one set to use, for example, the blue icons.

So, how do these icons work?

Green icons become active when Zombies are spawning and being placed on the board (when dealing out more Zombie cards during STEP 5).

When two Zombies with the same green icon appear next to each other in the same row, (or when a single Zombie that has two identical green icons is placed onto the board) the special ability activates:

Downward pointing triangle
Immediately move the matching Zombies down one row towards the Barricade.

The next two abilities activate in subsequent rounds if the cards they are on are still in play:

Blue icons become activate when players Fight Zombies (STEP 2).
It is recommended that during STEP 2 each player takes two turns instead of one.

Shield icon
A Zombie that has a blue shield icon is called a ‘Blocker’
You can’t ‘shoot’ through this Zombie, it blocks you from targeting or removing any Zombies behind it, in the same column until the Blocker Zombie is defeated and removed from play.

Bullseye/Target icon
When you tagged and successfully defeat a Zombie with this icon it will absorb all your remaining dice, stopping you from targeting or defeating other Zombies on your turn.

Speech Bubble
If a Zombie with a Speech Bubble icon is in play, then during STEP 2 when players are Fighting Zombies they cannot talk! Any talking results in all Zombies advancing one row.

Hand icon
While a Zombie with this icon is in play any Items that the players have can’t be used!

In a normal game you only get one Zombie in each space on the board, but Apocalypse Mode can cause Zombies to ‘Stack up’

A Zombie Stack will move as one, when targeting and fighting a Zombie stack the active player can target and defeat any Zombie in the stack (or even multiple Zombies).

Remember:
You can choose to have both Green and Blue active or only play with one colour active.
You can play using Apocalypse Mode at any difficulty level.

This website uses cookies to improve your experience while you navigate through the website. Out of these, the cookies that are categorized as necessary are stored on your browser as they are essential for the working of basic functionalities of the website. We also use third-party cookies that help us analyze and understand how you use this website. These cookies will be stored in your browser only with your consent. You also have the option to opt-out of these cookies. But opting out of some of these cookies may affect your browsing experience.
Necessary Always Enabled
Necessary cookies are absolutely essential for the website to function properly. These cookies ensure basic functionalities and security features of the website, anonymously.
Functional
Functional cookies help to perform certain functionalities like sharing the content of the website on social media platforms, collect feedbacks, and other third-party features.
Performance
Performance cookies are used to understand and analyze the key performance indexes of the website which helps in delivering a better user experience for the visitors.
Analytics
Analytical cookies are used to understand how visitors interact with the website. These cookies help provide information on metrics the number of visitors, bounce rate, traffic source, etc.
Advertisement
Advertisement cookies are used to provide visitors with relevant ads and marketing campaigns. These cookies track visitors across websites and collect information to provide customized ads.
Others
Other uncategorized cookies are those that are being analyzed and have not been classified into a category as yet.
SAVE & ACCEPT